On Esp@cenet, thousands of patents are available worldwide, including some 200 Bugatti Patents. Take a look at ep.espacenet.com and search for the Applicant. either Bugatti Ettore, Jean or Roland. A plain search for Bugatti gives other patents as well, mostly from Messier Bugatti.

Apart from the central ep.espacenet.com address, also an address per country is available, for instance nl.espacenet.com for the Netherlands.

Having just recovered from the car of the century hipe, the Dutch car magazine Autovisie did a enquiry on the best sportscar ever. Various important car-people were asked for their 10 best sportscars, and a list of the best 100 was made.

Read all about the other cars in their issue of October 13. And the winner ? (at least faster compared to the Bugs:) The McLaren F1. Maybe in a few years from now another, newer, Bugatti will win the contest....

At the IAA in Frankfurt, a new model of the Veyron was shown, showing that it is almost ready for production (scheduled to begin in 2003). The supersportscar is made out of carbon fibre, while the skin is a combination of aluminium and plastic.

New is a retractable rear spoiler, and a wheelbase 5 cm longer than before (now 270cm). Apart from performance figures which were given earlier (0-100 in 3s, a top speed of 405 kmh) an accelaration time of 14 seconds was given for the 0 - 300 sprint! 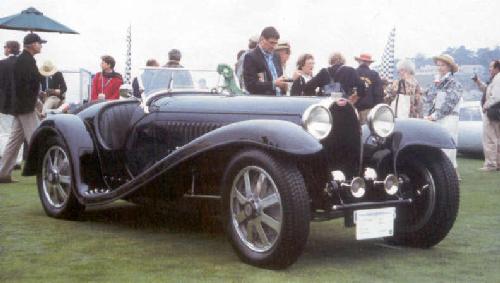 Evert Louwman (of the fantastic Dutch Nationaal Automobielmuseum) won the Briggs Cunningham Trophy at this yearīs Pebble Beach. This is a special trophy, for the most exciting car in the event! Louwmanīs T54 bears a T55-like body.

Of the Veyron 50 will be made per year, 40 have been sold already. These cars will not be made at a new production facility near Molsheim, but at various facilities of Volkswagen. Bugatti Headquarters will remain at the Château St. Jean, though.

It is with great sorrow that we wish to announce the passing away of Mrs. Stella Tayssčdre, former Secretary to Mr. Ettore Bugatti (from 1928 to 1945).

A book of condolences will be open at the service.

Although it never flew and is now on display at the EAA Air Adventure Museum in Oshkosh, Wisc., the sleek, futuristic lines of the Bugatti Model 100 racer still inspire speed-seekers.

The Indianapolis-based American Aviation Co. is latest to fall under its spell. A spokesman for the company announced recently that it plans to build a modern composite version of the legendary 1937 design.

Engineering is already under way and construction of the new Bugatti is scheduled to begin next month. AAC's goal is to build a plane that will break the world piston-powered speed record of 528 mph, set in 1989 by Lyle Shelton in his Grumman F8F Bearcat "Rare Bear."

AAC is also eyeing time-to-climb records and a possible assault on the sound barrier.

Info from: www.landings.com, brought to my attention by Steve Tournay. 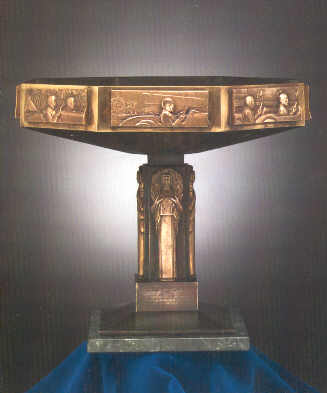 On december 15 the art et līautomobile auction closed in New York, where this beautiful winners trophy for the 1937 edition of the Le Mans 24 hours race was auctioned.

As we all know, the trophy was received by J.P. Wimille and R. Benoist, who won that year in a Bugatti T57G.

Itīs a pity, but it now is too late to obtain this piece of Bugatti history, as it was sold for $31,165.

For future auctions go to arteauto.com.